What do you get the person who has everything? That’s easy- jewelry! Even if you’re unsure of someone’s taste in jewelry, getting them a piece with their birthstone is a pretty safe bet.

Welcome to your birthstone jewelry journey. Let’s start at the beginning (a very good place to start) with January and February. Consider this your beginner buyer’s guide for your preliminary quest.

Garnet is typically associated with a vivid red colour, however they just happen to be the most abundant of the garnet varietals. Garnet also comes in green, known as tsavorite, and pinkish oranges that are known as demantoids. The different colours come from the different rock chemistries and conditions that must occur in order to form the gemstones.

Garnets are mined all over the world, and they are still discovering new mines to this day. 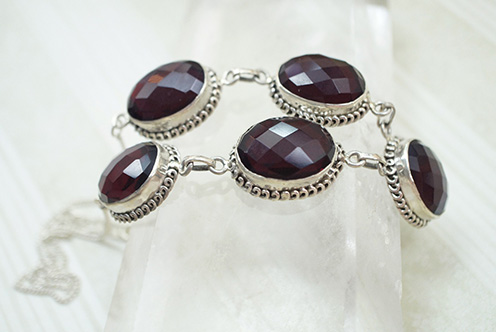 The first known use of red garnet in history was to adorn the necklaces of pharaohs in ancient Egypt, and even in tombs to accompany the deceased to the afterlife. Centuries later it became one of the most widely traded gems in ancient Rome. By the Middle Ages, nobility and clergy members treasured these gems on rings and rosaries.

How to Buy Garnet

Because garnet comes in many different colours and compositions, their appearance can vary quite a bit. Its hardness ranges from 6.5- 7.5. If it’s closer to the 6.5 you may want to choose a necklace or earrings but if it’s running near the 7-7.5 range, then a ring can certainly be added to your list of potentials.

Amethyst is a variety of beautiful purple quartz stone that is best known as the birthstone for February. On a basic level, it is formed when silicon and oxygen are under extreme heat and pressure (SiO2 for you chemistry nerds out there).

Amethyst is mined in several countries such as Brazil, Uruguay, South Korea, the U.S. and Canada. Interestingly the largest amethyst mine hails from our very own backyard in Thunder Bay, Ontario. 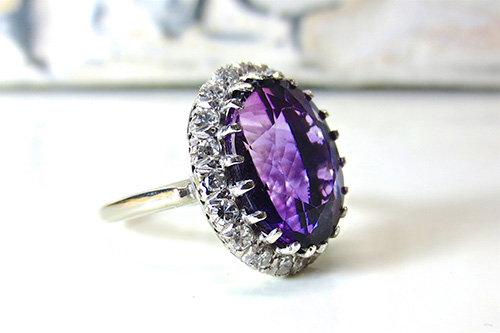 Amethysts have had a colourful journey in world history. The word “amethyst” comes from the Greek word, “amethystos” which translates to “not drunken” as the Greeks believe that if you wore an amethyst you would not become intoxicated while drinking. While we can’t confirm that, it’s still an interesting origin story for this little quartz.

Fast forward to Medieval Europe, where people believed the stone to possess healing powers and would help them keep a “cool head,” so soldiers would wear amethyst amulets into battle.

How to Buy Amethyst

Amethyst is absolutely stunning and surprisingly affordable. Its hardness is seven on the Mohs scale. This means it’s suitable for all kinds of jewelry including rings.

It may show a bit of weathering if you wear the ring every single day for a few years, so it may require some extra care and polishing.

Whatever birthstone jewelry you buy, it’s always a very personal choice for your loved one or for yourself. Despite some tips that we mentioned above, our biggest piece of advice is to not get too hung up on the semantics or grading of a stone. If you find a piece you love that truly speaks, no, sings to you, that’s the one you should go for. After all, the true value of jewelry is often the sentimental value that we attach to it.

If all else fails, you can always consult with our staff at J.H Young in Brantford, we’re always happy to help with your birthstone jewelry journey. Visit our store today to view our selection and get started.